After a break of a couple of years, we successfully restarted our regular trips to Manchester back in March. That trip went really well… so, over the weekend Saturday 11 November – Sunday 12 November, we travelled north again!

Clapham Common West Side came alive briefly at 6am on the Saturday morning at ‘the gathering point’ and the team loaded into the bus. A clean escape from London and an untroubled drive up the M40 and M6 led straight to Timperley Lacrosse Club before 10.30am – the new road into Manchester from Junction 19 completed a pretty painless journey.

Once the kit was put on and Ben T’s skins arrived (via Brooklands), ‘come on Dad, keep up’, the team warm up focused on picking the ball off the sticky Manchester pitch. ‘Get low – no, lower than that’! Note to Pete – make sure the next info pack asks M&D’s to put playing wear for the first game IN the equipment bag. 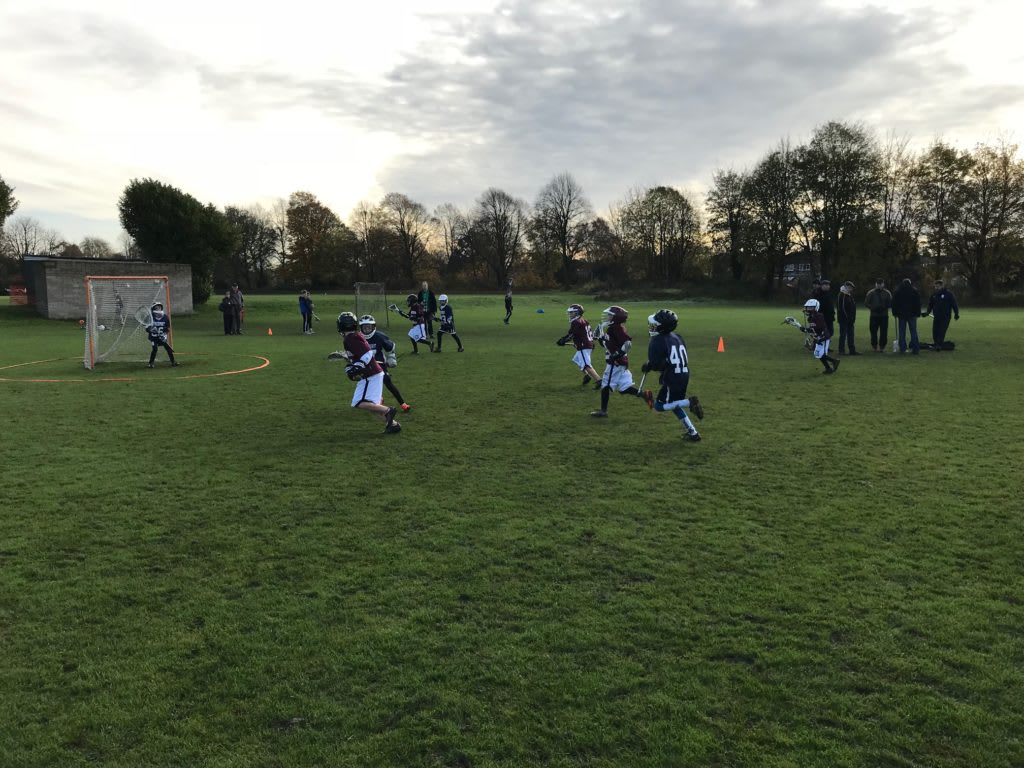 We lost our first two games, against Cheadle Hulme and Timperley. Not a catastrophe by any means. One of the reasons for making these trips is to provide good match experience and to allow the guys to develop game understanding and build on our regular coaching sessions. Game situations were discussed and, as the morning progressed, it was clear ‘the light was going on’. Hurrah for hot dogs and chips at Timperley!

Having made the mistake in March we made it to Hyde Leisure Pool really early and the team managed to get wrinkly fingers after a solid two hours in the deep end. At least muddy knees would be a thing of the past!

An evening meal in the Scout Hut in Bramhall (a posher facility even than our regular hut which was double booked for dancing exams) Mexican chicken topped off with a well fingered, team made, spotted dick – actually really nice! The evening was completed with indoor games – the same stuff old Northern Tourers will remember and can explain. And then to a comfy bed (well, mats and sleeping bags). And a full load of the travelling Dads ‘roughing it’ overnight as well.

The Sunday morning game against Stockport was played on more sticky stuff. The lessons learnt on Saturday really showed through – we started to play some good defence, run smooth clears and score some really good goals. A win for the u12s! Good stuff. Thanks for hosting the game Stockport and for providing the after match hot dogs and soup.

A quick summary and then all safely back in London by around 5.30pm.

Thanks to our friends at Cheadle Hulme, Timperley and Stockport for hosting. Another good step forward – and we are planning a return in March ‘18